History of water use in the Perth—Bunbury region

Home > History > History of water use in the Perth—Bunbury region

Historical association of wetlands and rivers in the Perth-Bunbury region

The Dutch were the first Europeans to discover Western Australia (WA) in 1616 and over subsequent years mapped the coast and lost many ships to reefs. The Dutch found that the land contained little in terms of accessible supplies and the Aboriginal people were seen as `fierce savages’ (Appleyard & Manford 1979). As a result, they made no attempt to claim the land. Between the 1700s and early 1800’s both French and British explorers mapped the WA coastline, although it was a British explorer (George Vancouver) who found the best natural harbour on the coast which he named King George Sound (in present-day Albany). This provided a valuable base for more detailed explorations of the coast. The rivalry between British and French interests allowed Captain James Stirling to persuade Governor Darling of the New South Wales Colony to allow him to explore the Swan River with the intention of determining its suitability as a site for a new colony. His reports led to the eventual establishment of a British colony on the Swan River in 1829. 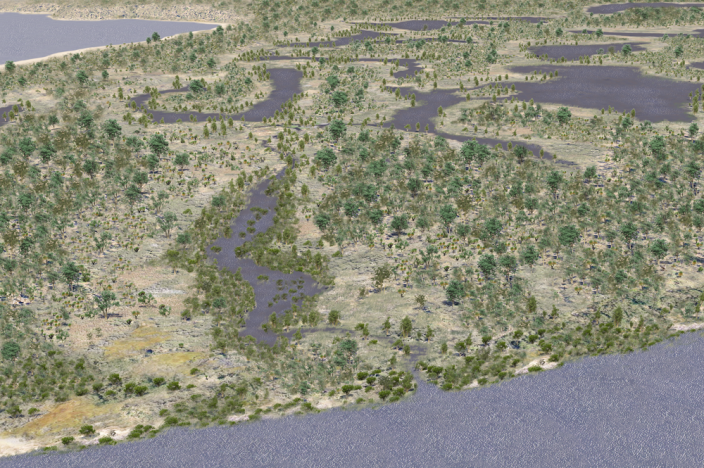 The early settlement of Perth and other cities/towns within the region has been well documented by historians (eg. Appleyard & Manford 1979; Stannage 1981; Ewers 1971; Barker & Laurie 1992; Richards 1978). Typically in these accounts, the settlers’ use and needs in relation to water has been secondary to the political and social intrigues of the times. The publication of `Water: The abiding challenge’ by Morony (1980) has remedied this situation for Perth. The book provides a comprehensive history of water supply, drainage, and sewage in Perth. No similar histories have been written for the other cities/towns within the study area.

Captain Stirling visited the Swan River in March 1827 and spent 9 days exploring (Markey 1977). He concluded that the area was supplied with a wealth of freshwater sources, including wetlands, streams, springs and accessible groundwater. He also concluded that the climate was moderate. At the beginning of autumn, he was fortunate to find an area with ample water supplies. On his return in 1829, he located the Swan River Colony (later renamed Perth) on the northern banks of the Swan River, just east of Mount Eliza. Why he choose this particular site has been the cause for much speculation (see Markey 1977 and Seddon & Ravine 1986). The colony was surrounded to the north by ten wetlands which at times of high rainfall joined and flowed through Claise Brook to the Swan River. In the colony’s first summer, it became apparent that the wetlands were an unreliable source of water and many settlers resorted to using groundwater extracted from shallow wells. The same situation occurred in Fremantle where the two inland wetlands also proved unreliable as a water resource and were quickly filled in and built over. Once the wetlands lost their importance for a water supply they turned from assets to liabilities restricting further growth of the city and posing drainage problems.

Map of the Wetlands of Perth in 1834 (CC from Wikipedia)

Despite Captain Stirling’s rosy descriptions of the availability of water, the early settlers quickly found that the provision of water was an impediment to growth and expansion inland. Initially, settlers and explorers may have gained insight into the location of sites of good water from Aboriginal people. The rapid decline in relations between Aboriginal people and settlers, especially through the attitudes of the first generation of locally born settlers, is likely to have limited this cooperation (Reece & Stannage 1984). Settlers obtained drinking water mainly from groundwater wells, as the lakes and springs proved to be often dry during summer. Accompanying the problems of finding water was the disposal of sewage, which initially ended up in cesspits contaminating many of the wells. The provision of drinking water and sewage didn’t become widely available until the early 1910’s. Corruption, intransigent local councils and a faltering economy until the 1880’s goldrush are probably responsible for this (see Morony, 1980). The gold was located in an area where water was difficult to find and this became an impediment to the development of this resource. This led to one of the world’s great civil engineering projects, the goldfields water pipeline which piped water from Perth (Mundaring Dam) to Coolgardie (eventually to Kalgoorlie).

Contamination of the shallow groundwater supplies resulted in a shift to using water from reservoirs on the Darling Scarp. Apart from problems at Victoria Reservoir, the State has been fortunate that dam construction preceded urban expansion and early legislation has led to the protection of the catchments of these reservoirs. The limited opportunities for the construction of further dams, the corridor plan (which indirectly protected groundwater mounds) and improvements in sewerage disposal have led to a return to using groundwater for domestic supply. Rapid urban expansion in the late 1980’s onto the Jandakot groundwater mound has again threatened this resource. The construction of reservoirs has had a profound impact on the environment, with areas permanently flooded and the natural flow of streams and rivers altered downstream of the dams.

Progress in dealing with wastewater was also slow with a gradual move from cesspits, to the collection of nightsoil, to septic tanks and finally to sewers transporting the waste to a treatment plant. The construction of sewers has often lagged behind the urban expansion and many suburbs are not sewered and use septic tanks. Potential problems identified with the use of septic tanks has encouraged a shift towards underground sewers.

Transport was initially very difficult with the cost of moving supplies from Fremantle to York being more than nine times more expensive than shipping them from England (Markey 1977). This was because overland transport was so difficult, the use of the river and sea transport was used where possible as this was much more economical. As the Swan River was very shallow and blocked by a bar at its mouth this limited shipping considerably. Dredging allowed boats to move up the river and near the turn of the century the bar was removed. By this time, however, the construction of railway lines and reasonable roads had led to the demise of river transport.

The steam trains used on the rail lines required regular water points. The expansion of the rail network into the goldfields meant that numerous storage reservoirs had to be created to supply the trains. The same situation can be found on all the other major train routes (including private timber company lines). Along with the tracks, a variety of bridges had to be built, where standing, these are now of historical interest. Roads also required supply stops where water could be obtained. Roads had a profound effect on the landscape; increasing the amount of surface runoff, resulting in wetland loss (many road reserves follow wetland chains), and the construction of bridges.

The timber industry used the Canning River for transporting logs downstream towards Perth. The industry is also responsible for the early pollution experienced in Victoria Reservoir, as workers were living on private land within the catchment and were contaminating streams entering the reservoir. Clearing in catchments as timber is removed increases runoff into rivers and streams. This and the extensive clearing that occurred for agriculture purposes has resulted in increased salinity within many rivers, streams, and dams (eg. Wellington Dam which was in danger of becoming too saline for even agricultural uses).